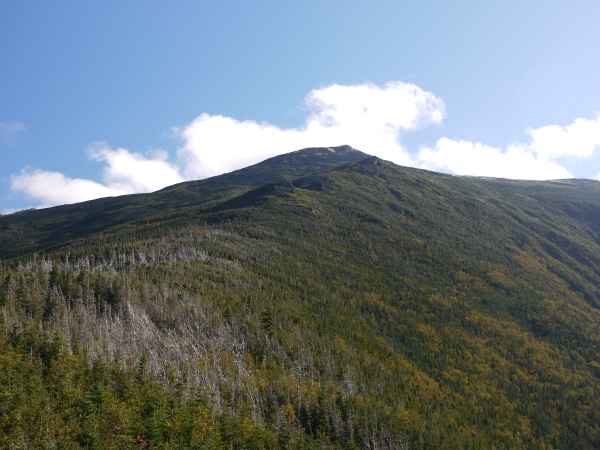 Sunday was our day to bag another peak.  As I’ve stated before we are not doing THE list, but if we happen to hit one of the 48 4,000 footers I’ll check it off THE list.  We debated once again between a few peaks, but finally decided on Mt. Jefferson.  I’ve been a little fearful of this hike because of the bouldering required, steepness of the ascent and most afraid of the descent on all that rock.  I’ve had some friends coach me on this hike, that I could do it, even with my fear of heights, a rotator cuff issue and occasional vertigo.  Ok I thought let’s do it.

The hike started out on the Caps Ridge Trail and it was easy enough.  A boggy area greeted us first.

From the boggy area we started a steady ascent up.  This wasn’t taxing and offered some fine views along the way. 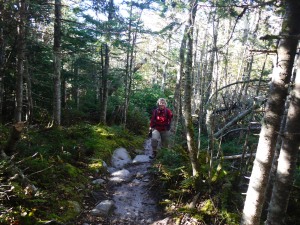 At 1.0 mile we reached a granite outcrop that offered views up the trail and to the summit.  This is where the fear of doing this set deeper into my heart. 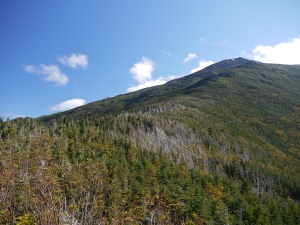 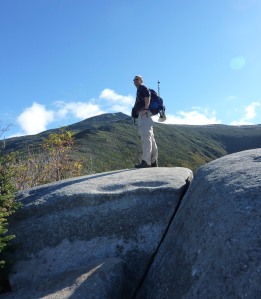 We continued along the way, only to run into an obstacle on the trail. A tent. Yes, that is right,  a tent smack dab on the trail, with two tents anchored just off the trail.  That was a first (we later found out these kids had stumbled off the summit of Madison in the dark and just went prepared.).

We hit scrub and hiked through it.

At 1.5 miles we really started the scramble up the caps.

I slowed down tremendously and it no longer became fun.  The fear of the descent being harder than the ascent set in.  We sat at the third cap and decided to call it a hike.  We had tremendous views and if it isn’t fun anymore, might as well turn around and try another day.

We started the descent and guess what? I had a blast going down.  I had to go down mostly on my bum, but I actually had a good time.

As we came down, we met two ladies and stopped, chatted for a bit.  While we talked a very friendly chipmunk kept running up to us.

Once we hit the wooded trail, we flew down the path. As Mike and I reflected on this hike, I realized what kept me from the summit was the fear of the descent.  I realized at that moment, I would return because I climbed the hardest part and had a fun time coming down.  So maybe next summer on a perfect, blue sky kind of day, we will conquer Mt. Jefferson.

The Details: Well take the Caps Ridge trail. Total time to the third cap and back was 4.5 hours. 3.6 miles